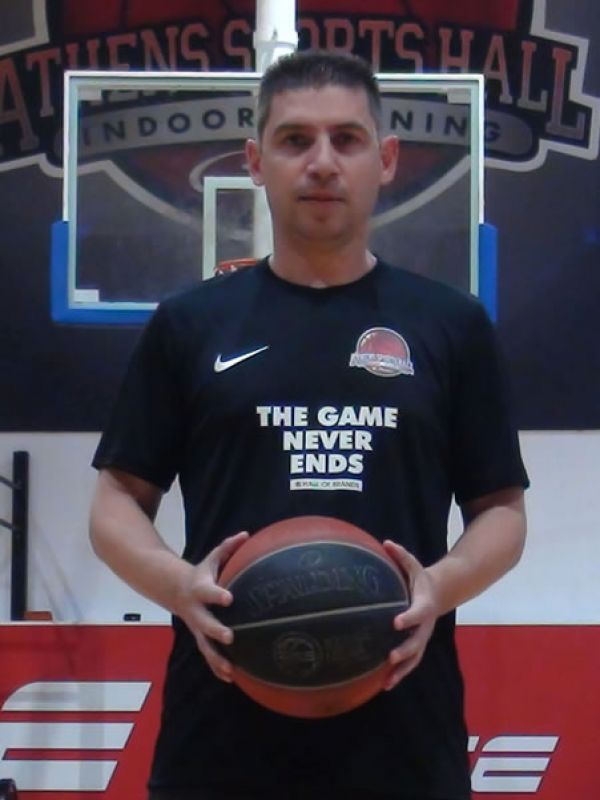 6977672074
This email address is being protected from spambots. You need JavaScript enabled to view it.

Achilleas Demenagas started playing basketball in 1978 at the age of 8 years old and went through all the stages of the national teams' first development program in the 1980s. At the age of 16 he competed in the Second Greek League while at the age of 17 he was the starting point guard for Esperos Kallitheas BC and gained the promotion in the A2 division.

In the same year, he was named Most Valuable Player (M.V.P.) in the qualifying phase European U16 Championship in Malta (1987). In 1988, he finished fourth with the U18 Greek National Team in the European Championships in the then united Yugoslavia.

In his first year in the first league (A1) in 1989 at the age of 19 he was first in average minutes per game with an average of 39.5 mpg in front of the great Nikos Galis and 6th in made three-point shots(43).

In 1994-95 he had one of the most outstanding performances a true point guard in the entire season finishing the game with a total of 14 assists in the Daphne vs Sporting game.

In order to be able to compete at such a high level and succeed (he was the shortest athlete with the highest average of minutes per game with an average of 29.5 minutes per game), he had to work very hard, individually, daily and consistently, improving his weaknesses.

Since 2007 he has been implementing a comprehensive and personalized basketball improvement program that follows the athlete 12 months a year and aims to maximize his performance.

In December 2014, he founded, along with Vangelis Ziagkos and George Pantelakis, the Athens Sports Hall which is the only private sports center in entire Greece that offers a combination of Force Elite Training and Basketball Personal Training programs.

With more than 30 years of experience knowing the safe path for the young basketball players to succeed and the specialized help from the coaching team, Achilleas Demenagas and his associates support dreams and the ambitions of the new generation of Greek basketball.

Achilleas Demenagas is a graduate with a bachelors degree from Athens University with a specialty in basketball and holds a Masters Degree (Msc) in "Maximizing Performance" from the Democritus University of Thrace. He is a member of SEPK. with a first-class diploma and has worked as a coach in the men's teams of AO Galatsiou, Prophetes Elias, ANO Glyfada, AGO Evryalis, POK Esperos, A.O. Kranidiou, Aris Nikaias, and in the youth teams of AS Sourmenos, POK Esperou, AE Galatsiou, AE Elliniko, Aek and Panathinaikos BC.